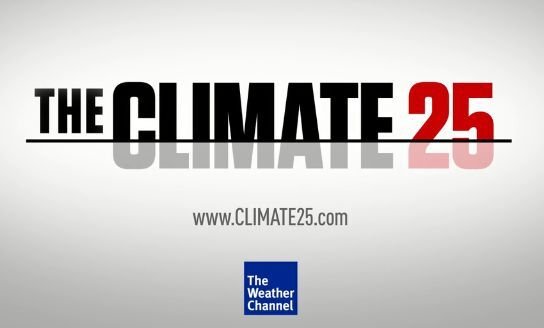 Two members of GMACCC are featured in the 25 key global voices on climate change in a special series from The Weather Channel. “The Climate 25” includes interviews “based on the fact that climate change is happening. Some subjects, however, infer from that fact and from specific weather and political events that have occurred, what the future might look like as the impacts from climate change become more common and more severe.”

GMACCC Chairman, Major General Muniruzzaman (Ret.), GMACCC and GMACCC Member Brigadier General Stephen A. Cheney, USMC (Ret.) were among those interviewed in the series that is a “culmination of a year-long (Weather Channel) project looking at climate change as a real-world problem that will require creative solutions from all points on the political spectrum.”

Major General Muniruzzaman (Ret.), GMACCC Chairman  stated in his interview that “Bangladesh is a country which is considered in the front line on the impacts of climate change.” Muniruzzaman, a career military officer who spent over 38 years in active duty, worries about the effects of climate change on Bangladesh, where tens of millions could be displaced as sea level rises.

Muniruzzaman is the Founder and President of the non-profit Bangladesh Institute of Peace and Security Studies. He is also the Chairman of the Global Military Advisory Council on Climate Change, a group of military leaders, both retired and currently serving, “committed to highlighting the potential security implications of a changing climate and advocating action, including by the military, to minimise the risks”

Muniruzzaman also served as a military adviser to the President of Bangladesh. As a senior Officer of the Bangladesh Army, Muniruzzaman has served in United Nations Peace Support missions in different conflict zones, such as the the post-election UN Mission in Cambodia that he headed.

Retired Brigadier General Stephen A. Cheney  said in his interview that “Seventy percent of the world’s military understand that climate change is a threat and have written into their national security plans”.

He knows the pressures that a changing climate will place on the United States military. Naval bases will have to deal with rising sea levels. The potential for conflict ignited by climate change will increase. And the U.S. military will continue to be among the first responders in the event of natural disasters

Having served for three decades in the U.S. Marine Corps, both in staff and command positions, Cheney understands the importance of preparing the U.S. military for this future. He is an advocate for military preparation in the face of climate change threats and a strong voice in the conversation about national security and global warming.

Cheney is currently the Chief Executive Officer of the American Security Project, a nonpartisan group focused on United States security in the 21st century. He has served on the organization’s board since 2006. He has also acted as a panelist for numerous forums on the topic, including the Association of Climate Change Officers’ 2015 Defense, National Security & Climate Change Symposium and Climate Week NYC 2014. He has characterized climate change as one of the most critical national security issues of this century.

The Climate 25 is a digital media and television experience featuring interviews with the world’s 25 most compelling voices on one of the most pressing issues of our time – the impact of climate disruption on human security.