Military needs to plan for impact of Climate Change: Briefing for Defence Sector highlights threats to peace and security 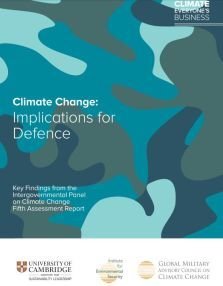 Whether risks emerge from human aggression or other factors, the core mission of national military forces is to provide protection from threats to security. Climate Change is multiplying threats to peace and stability, forcing military leaders everywhere to adapt strategic planning.

A briefing published today summarises security-related findings of the Intergovernmental Panel on Climate Change (IPCC) for the leaders of defence communities and associated policy makers. The briefing makes clear that the impacts of climate change will affect all parts of the world, and outlines potential flashpoints of conflict and threats that could require large-scale military response.

The briefing is a joint publication of the Global Military Advisory Council on Climate Change (GMACCC), the Institute for Environmental Security (IES) and the University of Cambridge’s Institute for Sustainability leadership (CISL) with the support of the European Climate Foundation (ECF).

The aim is to provide an accessible and concise summary of key findings of the IPCC’s Fifth Assessment Report (AR5) to be readily used by senior leaders of defence organisations and policy makers to better adapt planning to reduce emerging climate-change-related risks to human security, improve disaster response and increase political stability of fragile states. This publication was born of the belief that the defence sector could make more use of the AR5, which is long and highly technical, if it were distilled into an accurate, accessible, relevant and readable summary.

Examples of climate change impacts                Possible responses by the military

Key points of the briefing include:

Climate change poses an increasing threat to peace and security in the world. Its impacts can increase involuntary migration, and reduce the ability of states to provide security.

Comments on the briefing:

“This briefing pulls together the disparate parts of the IPCC’s latest report relating to defence into a clear and easy to understand document. It provides vital information on how the defence sector will need to respond to this global challenge.” – MAJOR GENERAL (RET) JOSEPH G SINGH, GUYANA

“This report is a very timely reminder to national and international leaders: the impact of a changing climate is not just an environmental issue, it is already accelerating instability in vulnerable areas of the world, which in turn poses a risk to geo-political stability, a pre requisite for sustained economic growth and well-being for all. There is no security solution to climate change, just greater risk of instability if we do not act!” – REAR ADMIRAL (RET) NEIL MORISETTI, RN, UNITED KINGDOM

“Climate change adds new force to many of the driving factors behind conflict and insecurity in the world today. It threatens to increase vulnerabilities and tensions in parts of the world that are already insecure. This briefing summarises the latest assessment by the IPCC of this complex relationship. It should be required reading for anyone interested in national security planning.” – DR EMILY SHUCKBURGH, HEAD OF OPEN OCEANS, BRITISH ANTARCTIC SURVEY / MEMBER OF THE UNIVERSITY OF CAMBRIDGE CENTRE FOR CLIMATE SCIENCE

The report is one of a series of thirteen briefings, based upon The Fifth Assessment Report (AR5) of the Intergovernmental Panel on Climate Change (IPCC). The information of the IPCC has been made public, and this briefing helps ensure that its value is delivered to leaders responsible for overall security.