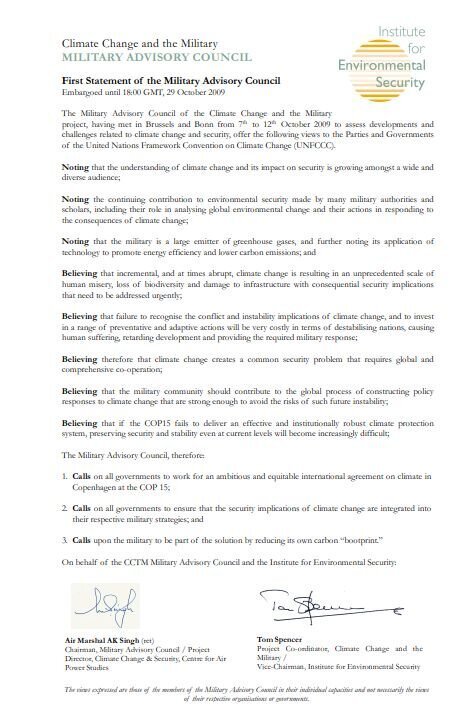 A group of serving and retired military officers from Africa, Asia, Europe, Latin America and the US released a statement today calling on all governments to “work for an ambitious and equitable international agreement” at the global climate talks in Copenhagen in December.

The statement, presented at a meeting today at Brookings in Washington, and issued simultaneously in Brussels, Dhaka, Georgetown, London, New Delhi and The Hague, says that “incremental, and at times, abrupt, climate change is resulting in an unprecedented scale of human misery, loss of biodiversity and damage to infrastructure with consequential security implications that need to be addressed urgently.”

The officers are part of an international initiative on Climate Change and the Military led by the Institute for Environmental Security (IES) in The Hague and 10 other think tanks from Asia, Europe and North America.

IES Vice-Chair, Tom Spencer, former President of the European Parliament’s Committee on Foreign Affairs, Human Rights and Defence Policy, said the aim of the statement was to stress that “climate change creates a common security problem that requires global and comprehensive co-operation.”

Quoting from the statement, Air Marshal (ret) AK Singh of India, Chairman of the project’s Military Advisory Council and Project Director, Climate Change & Security, Centre for Air Power Studies, New Delhi warned that “failure to recognise the conflict and instability implications of climate change, and to invest in a range of preventative and adaptive actions will be very costly in terms of destabilising nations, causing human suffering, retarding development and providing the required military response.”

Maj Gen (ret) Joseph Singh, Former Chief of Staff, Guyana Defence Force, added that, “Based on the fact that we have been involved in disaster relief operations, we know the trauma, the human misery, the damage to infrastructure. So that hands- on experience gives us the confidence that we have some knowledge and expertise that we can share and work in a collaborated way with decision-makers to anticipate, to pre-empt and to be involved in contingency planning.”

Asked to illustrate an experience from his region, U.S. Brig Gen (ret) Wendell C. King replied, “The hurricane Katrina that hit New Orleans.” He added that America’s ability to respond was severely stressed and if such a technologically capable nation such as the USA thus struggled, the picture was not too rosy for nations not having adequate capabilities.

At its first meeting in Brussels earlier this month the group of officers were especially concerned about the rapid increase in glacial melt in the Himalayas, which will result in increased flooding followed by devastating water shortages throughout the region.

Maj Gen (ret) Muniruzzaman, President of the Bangladesh Institute of Peace and Security Studies, said that the affects of climate change could lead to the migration of millions of people in places like Bangladesh where the impact of climate change would cause an estimated annual loss to the economy of $ 1 billion of GDP by 2010 and $ 5 billion by 2070. Water scarcity will have server adverse impact on human access to fresh water, food production, fisheries and wildlife, river transports, hydropower and human health according to a report by his institute.

The joint statement calls on all governments to ensure that the security implications of climate change are integrated into their respective military strategies and also calls upon the military to be part of the solution by reducing its own carbon “bootprint”.