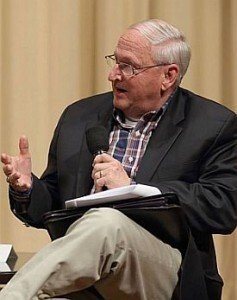 GMACCC member Brigadier General Wendell Christopher King (Ret.) participated in a screening and a panel discussion of a new film that highlights the relation of climate change and global security. Hollywood Health & Society (of the USC Annenberg Norman Lear Center) hosted the event on 30 April at the Linwood Dunn Theater in Hollywood for the documentary film Extreme Realities that will be shown on PBS TV in the United States in September.

Marty Kaplan, the director of USC Annenberg Norman Lear Center, served as moderator at the discussion, and said that General King was “as perfect casting as we could want tonight” for the event.  General King is the author of Understanding International Environmental Security: A Strategic Military Perspective, written from his interest in the relation between essential national security of all nations and emerging threats from changing environmental conditions. “The best analogy I can draw from my security perspective is: we’re in a hundred years war because of the damage that we’ve already done and the amount of time it takes to correct,” General King said.

The film, narrated by Matt Damon, demonstrates to audiences how climate change risks such as extreme weather, food shortages, and mass migrations pose threats to global security. For a film trailer and video of the panel discussion, visit the website of the Hollywood Health & Society.