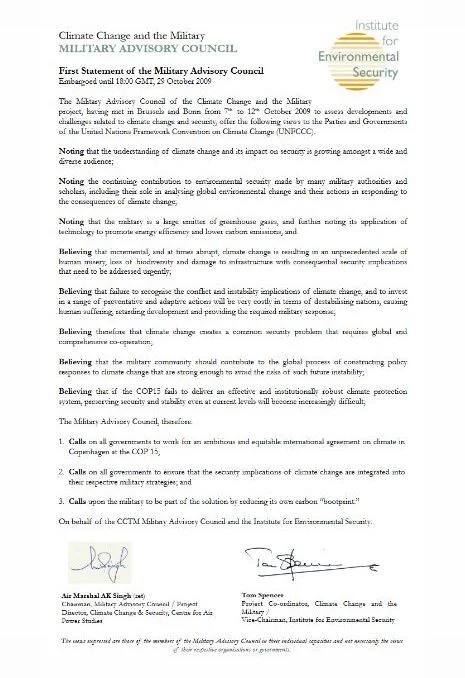 The Military Advisory Council of the Climate Change and the Military project, having met in Brussels and Bonn from 7th to 12th October 2009 to assess developments and challenges related to climate change and security, offer the following views to the Parties and Governments of the United Nations Framework Convention on Climate Change (UNFCCC).

Noting that the understanding of climate change and its impact on security is growing amongst a wide and diverse audience;

Noting the continuing contribution to environmental security made by many military authorities and scholars, including their role in analysing global environmental change and their actions in responding to the consequences of climate change;

Noting that the military is a large emitter of greenhouse gases, and further noting its application of technology to promote energy efficiency and lower carbon emissions; and

Believing that incremental, and at times abrupt, climate change is resulting in an unprecedented scale of human misery, loss of biodiversity and damage to infrastructure with consequential security implications that need to be addressed urgently;

Believing that failure to recognise the conflict and instability implications of climate change, and to invest in a range of preventative and adaptive actions will be very costly in terms of destabilising nations, causing human suffering, retarding development and providing the required military response;

Believing that the military community should contribute to the global process of constructing policy responses to climate change that are strong enough to avoid the risks of such future instability;

Believing that if the COP15 fails to deliver an effective and institutionally robust climate protection system, preserving security and stability even at current levels will become increasingly difficult;

1. Calls on all governments to work for an ambitious and equitable international agreement on climate in Copenhagen at the COP 15;

2. Calls on all governments to ensure that the security implications of climate change are integrated into their respective military strategies; and

3. Calls upon the military to be part of the solution by reducing its own carbon “bootprint.”