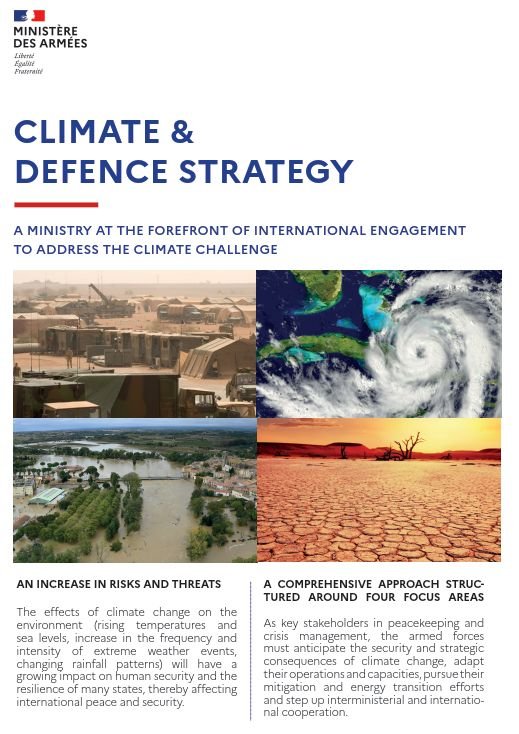 The Ministry of the Armed Forces adopts a Climate & Defense strategy

Florence Parly, Minister of the Armed Forces, approved on Monday, April 25, 2022 the draft ministerial strategy Climate & Defense in order to prepare the armed forces for the climate challenge.

By amplifying risks and threats, climate change will exacerbate tensions likely to lead to open crises or even conflicts. This phenomenon affects already the international strategic context and, through it, the conditions in which the French armies carry out their missions as well as the capabilities they must have. In line with the joint declaration of defense ministers "Climate change and armed forces” adopted at the Paris Peace Forum in November 021 and now supported by 26 countries, the Armed Forces General Staff presented to the Minister for the armed forces a draft global Climate & Defense strategy in order to engage the armed forces in adapting to climate change.

As a result of the work carried out with the support of the General Directorate of Armaments, the Directorate of territories, real estate and the environment, and the directorate general for international relations and strategy, will engage the Ministry of the Armed Forces in a global approach structured around four main lines of effort:

- Initiate a dynamic of adaptation of the defense tool to upheavals predictable induced by climate change;

- Continue the contribution of the Ministry for the Armed Forces to collective efforts in terms of mitigation and energy transition;

- Intensify the dynamics of cooperation on defense issues related to climate change within the ministry, and at the interministerial and international levels.

Beyond climate issues, the Ministry of the Armed Forces actively contributes to the protection of the environment. It has in particular adopted a biodiversity preservation strategy to reduce its footprint on natural spaces as much as possible while ensuring the preservation of the operational capacity of the armed forces and it has adopted a defense energy strategy to limit its dependence on fossil fuel products while reducing its carbon footprint. It contributes to the objectives of the national low-carbon strategy and to the achievement of European and national objectives in terms of mitigation.

With this Climate & Defense strategy, the Ministry of the Armed Forces is continuing and deepening this approach to make the armies a committed actor in taking into account the climate challenge. Air Force General Eric Autellet, Vice-Chief of the Defence Staff, is designated "climate delegate” to ensure the coordination of the ministry’s actions in this area. This mission works in close coordination with those responsible to the Director of Territories, real estate and the environment, senior civil servant for sustainable development.

Awaiting the publication of the English version of the strategy on the ministry's website, the following English documents are temporarily available here: