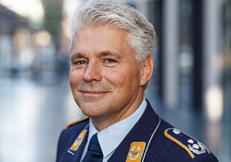 Previously, he has served as head of Geo-sections at the German Air Force Air Operations Command, and as acting Chief Meteorological and Oceanographic Officer and Section Head at the NATO Allied Command Operations.

As Staff Officer at the German Air Force he was responsible for the Geo support for missions and operations as well as for further development especially for forecasting tools on space weather effects.

With a wide range of professional experience on the tactical, operational and military-strategic levels, he experienced the requirements concerning military operations and humanitarian aid missions. In theatre (SFOR, ISAF, OEF, OHQ EUFOR Congo) he observed directly the impact of climate change and dependencies on the operations.

He has a degree in Meteorology and Geophysics (Humboldt-University Berlin) and has been engaged in exploration and study of atmospheric processes since the undergraduate days.

As a head of GEO- expedition, he managed outstanding measurement campaigns over the Andes (first measurements of atmospheric turbulence up to the lower edge of stratosphere) and Himalaya (pioneer flights with a motor-glider and producing of an accurate 3D Model (20cm resolution) of Mount Everest) in cooperation with the German Aerospace Center (DLR).

As a glider pilot, Rene is regularly observing the effects of climate changes (glacier monitoring, strengthening of the jet stream, and dehydration of landscapes) with a bird’s eye view. René is also vice-president and board member of Europe Air Sports and of the German Air Sport Federation.

Rene became a member of GMACCC in October 2019.