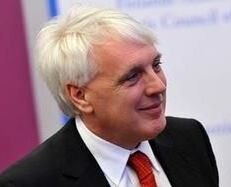 Dr. Jamie Shea was elected as Secretary-General of GMACCC on 7 June 2018.

Among his other affiliations he is professor of strategy and security within the Strategy and Security Institute at the University of Exeter (since September 2018). He is also a senior fellow responsible for security and defense programs at Friends of Europe and a senior advisor with the European Policy Centre, both based in Brussels.

From 1980 to 2018, Jamie was a member of the International Staff of NATO in Brussels. His last position was Deputy Assistant Secretary General for Emerging Security Challenges where he was responsible for taking NATO’s work forward in areas such as non-proliferation of weapons of mass destruction, cyber defense, counterterrorism, and energy security. He oversaw strategic analysis and forecasting as well as the NATO Science for Peace and Security program, which develops and funds capacity-building, and technology projects with NATO’s partner countries across the globe.