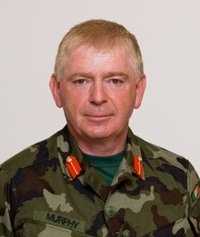 In his overseas service Brigadier General Murphy Seconded to General Secretariat of the EU as a member of the EU Military Staff with special responsibility for the Middle East region and Transnational Terrorism from 2001 – 2004, and he has served as a member of the International Conference on Former Yugoslavia (ICFY) – joint EU & UN monitoring mission covering the Balkans in 1995-96. In addition he has completed four tours of duty with the United Nations in the Middle East serving in command and senior staff appointments at Force HQ level.